The Hemp Revolution is Just Around the Corner!

SALAR Media Group / Hemp  / The Hemp Revolution is Just Around the Corner!
0

The Hemp Revolution is Just Around the Corner! 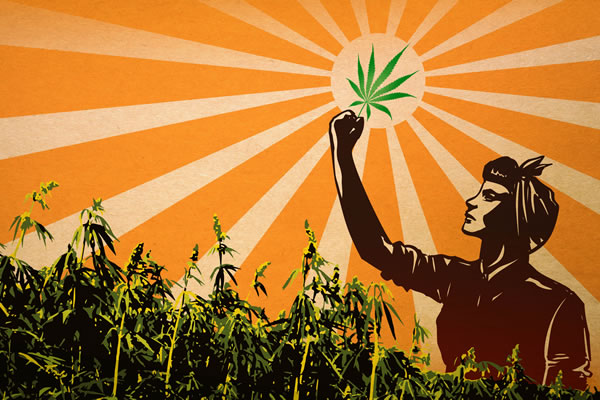 A quiet cousin to cannabis’ celebrated and controversy-causing cachet, hemp is about to come into its own!

For years, hemp has quietly, humbly existed in the background, overshadowed by its more glamorous and headline-grabbing cousin. However, signs are mounting that hemp is about to emerge from the shadows and take centre stage in the debate, as businesses and politicians the world over begin to realise the scope of its potential. Innovations in hemp technology continue apace, and are becoming ever more high-tech as time goes on. Recently, it was announced that hemp fibres can be used to make supercapacitors (a type of battery highly useful in the electric transport business) equivalent to or even better than graphene, the current gold standard.

Hemp continues to be of great interest in the world of sustainable transportation in general. Several world-leading automobile companies including Lotus and BMW have utilised hemp fibres and plastics in the construction of their vehicles for years; now, there is even talk of ahemp aeroplane in construction, which will not only be built from hemp, but will also run on hemp biodiesel!

Other slightly more mundane but still very interesting innovations include the development of a special type of hemp oil for high-temperature cooking, known as high oleic hemp oil, and a hemp-based acoustic sound-dampening system for home or office use!

Laws are relaxing throughout the world

Politicians throughout the world are beginning to promote hemp in an effort to increase sustainability and environmental health, and arguably to an extent never seen before.

In the U.S., the state of New Jersey just passed a bill permitting the cultivation of hemp; the U.S. National Congress recently released a 2016 spending bill that sets out various protections for hemp and cannabis businesses from interference from the Department of Justice, and theHR525 Industrial Hemp Farming Act of 2015 is currently wending its circuitous route through Congress.

In the Indian state of Uttarakhand, officials are currently developing low-THC strains to be legally cultivated as hemp by farmers in receipt of a government license; in October 2015, the African nation of Malawi legalized the cultivation of industrial hemp for export.

In Japan, First Lady Akie Abe recently stated in a magazine interview that she had considered becoming a hemp farmer, in a bid to revive interest in Japan’s hugely-important yet now taboo traditional crop.

“Hemp is a plant of which all of its parts can be used effectively,” Ms. Abe is quoted as saying. “While it is not yet permitted in Japan, I think it can be put into great practical use for medical purposes as well.”

Over in the Netherlands, Sensi’s sister company HempFlax is hard at work as usual, producing hemp for multiple clients and applications, and constantly fighting to dispel the myths surrounding the industry and bring it to mainstream acceptance. A company with a strong environmental bent, HempFlax aims to provide as many eco-friendly, hemp-based alternatives to conventional fossil-fuel-based industries as possible.

In 2016, HempFlax will be consolidating its global presence in the hemp consultancy business, specifically focusing on development of the domestic hemp-farming industry in Romania. In Alba County, Romania, HempFlax has invested 5 million euros and is currently cultivating 750 hectares of hemp.

HempFlax is also looking across to the U.S. and Canada, both of which have rapidly-expanding domestic hemp markets, and is intensifying research and development into new products and innovations, particularly in the field of nutrition and health.

Hemp is popping up everywhere An electron microscope image of a supercapacitor electrode. This one’s made from graphene, but soon they may be made from hemp!

It is clear just how much hemp has grown in importance in recent years, as CBD products are now showing up on the shelves of the Dutch “natural” drugstore chain De Tuinen, and hemp seeds and hemp oil are readily available inAlbert Heijn supermarkets throughout the Netherlands. Elsewhere in Europe, one is less likely to find hemp CBD on sale in shops, but there are hundreds of online retailers offering a vast array of products.

Within the medical world, recognition of the potential of hemp CBD to treat illness is gathering speed. Recently, a patient trial was announced to investigate the effect of hemp-derived CBD on plantar fasciitis, a condition that causes pain in the heel due to inflammation and inflexible Achilles tendons. This study will use hemp grown in Colorado by CBD Unlimited, and is conducted by Endexx Corporation, a company specialising in medical cannabisproducts. The same outfit already conducted a trial into diabetic neuropathy and hemp CBD, and found that “almost all” of the 13 participants experienced relief.

There has been a huge amount of controversy over the concept of hemp CBD oil in general since products first began appearing some years ago. Opponents argue that hemp is low in cannabinoids, and that special strains of high-THC cannabis bred with low-THC hemp are the only way to consistently produce sufficient cannabinoids to be medicinal.

Others even go so far as to state that without THC, CBD is useless, and that even conditions found to benefit from CBD will benefit more from a combination of THC and CBD than from CBD alone.

Often, it seems that these arguments can be tied back to those who have a vested interest in supplying CBD products produced from high-THC cannabis strains, who could easily be outcompeted if the hemp CBD industry came into its own, or from activists seeking to thwart CBD-only legislation by claiming that medicinal cannabis products require THC. While such activists may have the noble intention of achieving full legalisation, manipulation of the facts is no way to achieve it.

Is hemp CBD inferior to CBD from “medical cannabis” strains?

There is actually abundant evidence of the ability of CBD alone to be greatly helpful for a wide range of conditions. In comparison, a handful of studies have looked at a handful of health conditions and concluded that a combination of THC and CBD worked better than either THC or CBD alone. Yes, certain conditions are better helped by adding THC into the mix, but this is certainly not the case for many other conditions. For example, epilepsy, which responds extremely well to the anticonvulsive effects of CBD, is generally not treated with THC, as THC can actually excite the central nervous system and lead to seizures even in non-epileptic individuals.

In any case, the argument that CBD works as medicine is often not the focus of the hemp hatred that is creeping into certain parts of the industry. In fact, most of the people arguing that hemp CBD is no good do not claim that CBD itself is no good, but just that the CBD produced by the hemp plant is somehow inferior. From all available evidence, this is untrue.

There is no indication that the structure of the CBD molecule changes between strains of hemp and strains of cannabis, and no justification for arguing that the molecule produced by hemp strains are somehow inferior. There is some justification for saying that hemp produces fewer cannabinoids in general than cannabis, but this is not particularly relevant given the vast scale that hemp can be grown on, and the far cheaper price to produce it.

Certainly, some of the early hemp-CBD oils were cheaply mass-produced in factories in China (the world’s largest hemp producer) without regard to safety standards and purity, and some of these may well have been ineffective and valueless. However, as Canadian and European companies continue to produce good-quality, tested products, the risk of unknowingly buying poor-quality products has lowered considerably (although it is still a good idea to do your research before buying). Hemp can be a rich source of CBD and other cannabinoids

Of course, it was only due to an arbitrary line drawn between hemp and cannabis that the distinction was defined in the first place. Prior to this, hemp and cannabis were interchangeable terms, and usage of the term “Indian hemp” was often the best indication that a type in question was high in cannabinoids.

In some respects, this means that the line between cannabis and hemp is becoming blurry once more. After all, they are the same plant, with nothing more than a legal distinction about THC levels to separate them.

While the need to maintain low THC levels won’t disappear, the idea that hemp is a plant devoid of cannabinoids at all is one that has somehow stuck in the collective consciousness of the weed industry and the interested public. This misconception needs to be fixed, and now that companies such as Hempflax are coming into their own, it is only a matter of time.