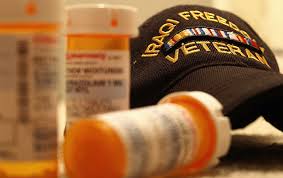 A bill introduced Thursday in the New Hampshire state assembly seeks to add post-traumatic stress disorder to the list of ailments eligible for medical marijuana treatment, which was legalized in 2013 but remains hard to obtain in the Granite state.

The proposed legislation comes as New Hampshire grapples with an opioid and heroin addiction and overdose crisis. Medical marijuana advocates argue that better access to cannabis would offer an alternative means of pain relief to people now using painkillers or heroin. In 2015 the state’s medical examiner attributed 385 deaths to opiates, almost double the 192 fatalities in 2013, according to New Hampshire Public Radio.

Also, adding PTSD to the list of illnesses approved for cannabis treatment could provide another option to people who’ve found no relief with standard anti-anxiety or antidepressant medication, advocates say.

A University of New Hampshire poll last year found strong backing for the legalization of both medical and recreational marijuana, with support levels growing each year.

Joe Lachance, a Republican state assemblyman who co-sponsored the PTSD measure, is one of the 62 medical marijuana cardholders in the state of 1.6 million people. A military veteran and former police officer, Lachance said he suffers from chronic pain and PTSD, ailments only marijuana has helped ease. He also said marijuana helped him kick an opiate habit.

“I can tell you, yes, it does work,” Lachance told Al Jazeera. “We have an opioid overdose crisis, and by allowing legal access to cannabis we could reduce overdose rates by 30 percent,” he added. “You don’t get addicted to marijuana. But you get addicted to opioids physically.”

Opioid painkillers including hydrocodone and oxycodone are all legal for prescription in New Hampshire, but widespread dependence on them led the state’s medical board last November to restrict how much doctors can prescribe. Lachance said this move prompted some painkiller addicts to turn to heroin.

Lachance said veterans are particularly vulnerable to painkiller addiction and the ravages of PTSD. Some drugs meant to treat the disorder have side effects that include impotence and have been linked to suicide.

“Veterans are dying every day from PTSD. If I could help one person, one kid, one soldier, one rape victim, then I’ll have done my work,” he said.

But New Hampshire Gov. Maggie Hassan, a Democrat, has stood in the way, Lachance said. He believes that Hassan has “buyer’s remorse” over signing the bill into law, and that she has set up a series of hurdles to making medical marijuana available.

For example, until recently the governor’s office declined to allow the issue of medical marijuana cards, saying they shouldn’t be available until dispensaries had opened. But in December, a woman suffering from late-stage cancer won a lawsuit against the state’s Department of Health and Human Services, forcing the agency to start issuing cards, the Union Leader newspaper reported. The cards allow for the legal possession of up to two ounces, or 50 grams, of marijuana.

New Hampshire remains a deeply conservative state in some ways. Many residents believe marijuana acts as a gateway drug that opens young people to heroin and other hard drugs. The Union Leader editorial board came out forcefully against marijuana legalization bills introduced earlier this week.

William Hinkle, a spokesman for Hassan, said that the governor understands “how debilitating PTSD can be for those who suffer from the condition” — including many veterans — and that she has worked to make permanent state aid to those suffering from PTSD and brain injuries. But she believes marijuana isn’t the answer.

“The most effective treatment for PTSD is to consult a mental health professional,” Hinkle said. “Use of medical marijuana by those who suffer from PTSD can discourage them from seeking appropriate mental health care when experiencing symptoms, raising significant concerns about including the condition in the bipartisan legislation that the Governor signed.”

Although research in the area has just begun, anecdotal evidence and recent studies indicate significant decreases in PTSD symptoms, including anxiety and depression, in people prescribed medical marijuana. Some veterans say smoking pot decreases the frequency of nightmares.

Unless legalization bills introduced earlier this week pass, veterans or anyone else caught with marijuana in New Hampshire can expect to face criminal charges. Although it’s decriminalized in the neighboring states of Vermont, Massachusetts and Maine, possession of a joint in New Hampshire can send a person to jail.

“New Hampshire is a police state,” said Rick Naya, the executive director of the New Hampshire chapter the National Organization for the Reform of Marijuana Laws (NORML).

Naya said he warned state policymakers 10 years ago of the dangers of reliance on painkillers.

“By stuffing opiates down people’s throats, it’s going to create a problem. You guys are going to have a heroin epidemic. You’re going to see it. And in the last two years, it is just out of control,” Naya said. “You can get stoned on marijuana and not chase a dragon that’s going to kill you.”