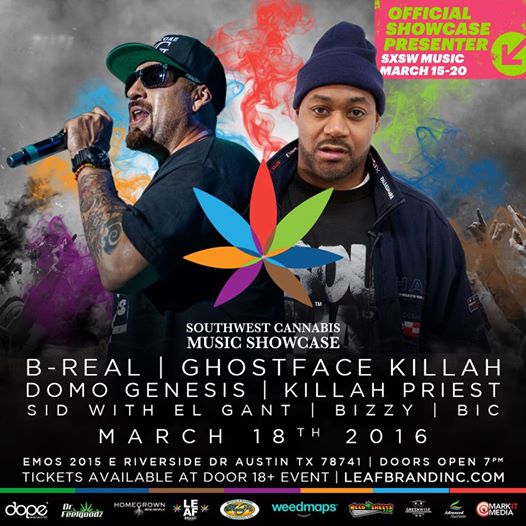 This is the first time ever a cannabis company has ever sponsored an event at South by Southwest. The All-star lineup is set to perform at Emo’s 2015 E. Riverside Dr. Austin, TX 78741 Doors Open at 7pm Tickets available at the door, this is an 18+ event.

Ghostface Killah first rose to prominence with the Wu Tang Clan, the group has had seven gold and platinum albums selling over 40 million copies worldwide

One of the first Latin Hip Hop stars, B Real and Cypress Hill burst onto the rap scene with such hits as “Insane in the Brain” and “I Ain’t Goin’ Out Like That”, their album Black Sunday went triple platinum.

“Having the honor of hosting the inaugural southwest cannabis music showcase for an event of this magnitude is humbling,” said Producer, Rory Mendoza. “As the cannabis industry sweeps the nation and begins to reenter society as well as our economy, it is only fitting to incorporate cannabis into the SXSW line-up. This is a historic addition to the occasion and I look forward to it growing in the years to come.”

This is the first ever Southwest Cannabis Music Showcase sponsored by Leaf Brand Inc.

The South by Southwest (SXSW) Conferences & Festivals offers the unique industry convergence of music, film, and emerging technologies. Fostering creative and professional growth, SXSW is the premier destination for discovery.